The VHF radio sparked again. It was 4 am on March 20th. I was setteling in for the final approach to Curacao.

‘sy Escape, this is the Curacao coast guard. Please answer‘. I pushed the send button ‘Good morning curacao coast guard, this is sy Escape‘. ‘Please state your intentions !’, echoed in my ear. I guess it was not a good morning, but rather the end of a long night with too little coffee.

‘We are heading for Spanish Waters. We have a booking with Seu Boca Marina‘, I said and waited for the welcome and good morning feedback that we have grown so acustomed to. I even wanted to throw in my expectations for a good Curacao coffee, but I held back.

‘Curacao waters are closed, you are not to enter our waters !’, was the rather brisk answer that came through the speaker. ‘Closed ?‘, I said without exhibiting my ability to construct sentences. ‘Closed !’, echoed back without delay but with exclamation. Apparently, we did not need sentences. The tone told me it was the end of a somewhat short conversation, but I did not give up that easy.

Let us backtrack to March 13th, Marigot Bay, Saint-Martin, before we progress

We had arrived St Martin from Saint Barths early March, islandhopping north from Martinique. I had visited the chandlers while Theresa and Vetle had been eating icecreams. I had successfullly convinced Theresa that 80 m of chain, more fishing gear and other ‘necessities’ are must-haves. The chain was to be delivered the following Monday. Life was good.

Back in the tender, we admired the big boats at Isla del Sol and Port de Plaisance before passing under the Simpsons Bay Causeway. Slowly we passed yachts that Irma had smashed and grounded some years back. It is a sad sight and a reminder for safe harbours in the hurricane season

sy Escape was at anchor in Marigot bay on the French side. That evening, we had a nice dinner and started to talk about the wrecks and the force Irma displayed. Slowly the discussion branched into rumours we had heard about a virus and how it started to hit some countries in Asia and Europe. We asked Google and contacted friends without landing a firm answer on what to do. The Caribbean was still open for business.

However, we did not want to be caught on anchor in Marigot Bay for the upcomming hurricane season. We decided to go to Immigration the following day and ask advice.

After breakfast I took the tender across to Port de Galisbay and met with Immigration. ‘No worries‘, he said while offering me an anti-bac hand wash. I decided to check out of St Martin and got our zarpe. Back in sy Escape, Theresa had googled more and we decided to be on the safe side. We prepared for the 500 nm crossing to Curacao and lifted anchor on Sunday 13th.

‘Closed ?‘, I tried again. ‘Closed !‘, the radio confirmed in my ears, while my brain tried to think. I knew I had to progress if this conversation should have a meaning. ‘Bonaire ?‘, was the best I could come up with. ‘Closed !‘. ‘Aruba ?‘. ‘Closed !‘. ‘Do you want me to go to Venezuela ?‘. ‘I do not want you to enter Curacao waters. You can go wherever you want !‘.

At this point my brain started to work. ‘NO !‘, I said over the radio taking charge of the exclamation mark. I had to turn the table on our conversation. ‘No ?‘, the coast guard replied surprised. ‘Yes, no !‘, I replied and bit my lip. ‘I mean, no we cannot continue without knowing where to go. We are not prepared. We are a small family with a 5 year old boy onboard‘. ‘Please standby on channel 16‘. We did. There was a small crack in the door to Curacao waters.

The crossing was sweet as …. – as a Kiwi’s would say leaving it up to you to determing how sweet. 500 nautical miles of gentle winds and flat seas. sy Escape spread her wings, Monique kept us on our SW course and we started to settle in for the crossing.

We passed NW of Saba and the 2.200 square km Saba Bank. The bank rises from the ocean floor at almost 2.000 meters to 20-50 meters and is a nursery for humpback whales. It is a shame to pass without exploreing but we will be back.

The spinnaker came out of the bag on Monday morning. Lazy setup. I run it from the bowsprit without using the pole. Genoa and main was folded. Coffee was warm. School for Vetle. Capital letters was on the curriculum. No focus. How can we expect a 5 year old to focus on capital letters when dolphins are playing behind your back? We tried logic, we tried Pavlov and we tried reverse psychology. The dolphins played. We caved in. Vetle have yet another memory to carry him through life.

2 am on March 20th. It was the final night of a 500 nm crossing from St Martin. We had been slowing down during the night because I did not want to enter Curacao in darkness.

The lighthouse on Klein Curacao was beaming just under the horison but still too far. It was on my stareboard side so I was heading straight for land on Bonaire.

With no rush, I reached for the binoculars. ‘Klein Curacao to stareboard means Ceru Betina on the bow‘ I thought to myself. I adjusted the binoculars and there it was. Counting 4 flashes every 22 seconds.

Ceru Betania Lighthouse was easy to single out. Buildt on the ‘window mountain’ in the Slagbaai national park. I double checked the map for the lighthouse signature. ‘Yeah, there it is‘. I reached out and gave a little pull on the steeringline for Monique. sy Escape turned 5 and then 10 degrees to stareboard. I set sail and sy Escape sped up towards Curacao.

‘sy Escape, this is Curacao Coastguard on channel 16‘, came over the radio after a 30 minute stand by. ‘This is sy Escape on channel 16‘. ‘You can proceed to Caracas Baai’. You are not allowed to anchor or thouch bottom. You can call the harbour master at 08:00”. The crack in the door opened a little more. We had time to think and work on solutions. ‘We will proceed to Caracas Baai. Thank you for your assistance‘. We could relax a little.

Time crept towards 0800. I started to call everyone I imagined could make a decision but to no avail. I got the runaround. I got frustrated and everyone I called was frustrated. Curacao officials wanted to assist, but the situation was ambigous at best. Here is a country that the day before had closed their waters for foreign yachts with good reason and the morning after we arrived. Stubborn Norwegians. Hours passed while waiting for someone to return my calls.

We decided to catch a mooring for dive boats while waiting. The mooring was off a small beach and on the edge of a nice reef. That was when we got aware of a guy on a yellow paddleboard heading towards us. We tried to wave him off, but he came longside. ‘I have the full story‘ was the opening remark. ‘I already contacted Amigoe. It is the main newspaper here in Curacao. They want to print your story‘. And from there and onwards, Victor Langerwerf was our firm support in the days ahead. Victor is the OCC port officer.

It was Friday. The sun had passed zenith and headed for the horizon. There was a screaming silence from our phones.

‘Let us go into Spanish Waters‘ I said to Theresa. She nodded. ‘Pack a grab-bag with the VHF and AIS transponders in case we need to jump off the boat’.

Today is New Year 2021/22. New year 2020 we spent on the Atlantic on our way to Barbados. This episode show our crossing – how we make and break routines and how we spend our Read more… 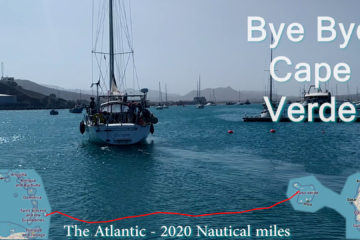 S1E4 is out. This time we enjoy the fantastic Islands of Cape Verde, Mindelo. Now we are 16N and in trade wind latitudes. Before setting sail for The Atlantic, we celebrated Christmas 2019 and prepared Read more… 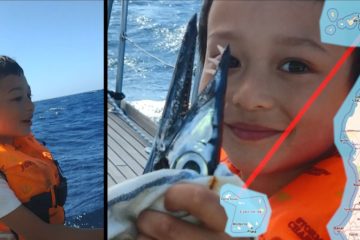 S1E4 is out. This time we sail from Portugal to Madeira and make a stopover in Gran Canaria for lots of stainless work on sy Escape. Follow the link and read up on it. We Read more…